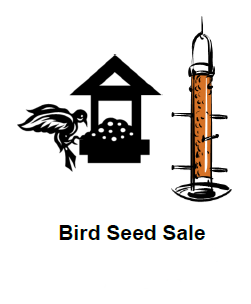 Our whole-hearted thanks to those who made the Club’s 2016 Bird Seed Sale a success. Dave Hogg, Janet Paisley, John Holden, Kevin Cwalina, Scott Connick, Tom Leback, Lou Tanner, and John McCauley volunteered on Saturday, November 5, to help load 8 tons of bird seed into the vehicles of our customers.  Dan Bieker and Kathy Sudduth had volunteered earlier that week to count the order when it was delivered by our wholesaler, Lizzie Mae.  Joanne Bricker, Lesslie Crowell, John Holden, Kathy Sudduth, Guy Babineau, Patty Kalbfleisch, Myrlene Staten, Amy Neale, Janet Paisley and Doug Rogers volunteered earlier in the sale to make “friendly reminder” calls to customers.   Many thanks to Maynard Davis who ably coordinated and managed all of these efforts, along with Doug Rogers.

It was an incredible team effort. Our “profits” from this, our only fund-raiser, will fund our community outreach projects, our Club projects and give us the flexibility to make a difference. Many thanks to all!!!